Teens love this fast-paced, high-energy wide game. What teen doesn’t like trying to take over the world? The games are usually fairly quick – between 10 to 20 minutes – and work great for groups of about 50 to 100, but it could be adapted for smaller groups too. 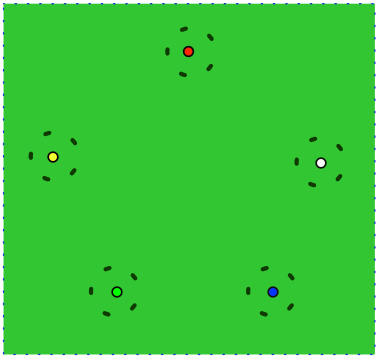 On a large playing field, set off five circles with pylons about 20 ft. in diameter. Within each circle place a pin of some sort – plastic bowling pins don’t have much weight and fall over too easy, but empty bleach jugs with a few rocks in the bottom work great!

Divide your players into five even teams and assign each team to a circle. At no time can any team go into any team’s circle – including their own. Each team should wear their team color. You can use pinnies if you have them, or use surveyor’s tape as arm or head bands, or use whatever you have.

Each team chooses a country which they will represent. It can be a real country or a made up one. For an added element, you can have them sing their ‘national anthem’.

A Gator Skin ball is the best for this game – it is easy to grip, doesn’t hurt like other balls when you get hit in the head, and it has enough weigh to be thrown hard. If you’ve never used them, I highly recommend them!

The ball is moved in the same way as in team handball – you can hold the ball for three seconds and/or take three steps with it. After this you must pass the ball or throw it in order to knock over the pin. Breaking this rules results in a loss of possession.

One thing you might want to do on a hot day is to have each team appoint a ‘general’ of their country. When defeated, the losing general gets doused with a bucket of water by the winning general. Alternatively, you have have both generals give a short speech concerning their loss or victory.