The rules are simple. There is one person who is in charge of throwing the balloons. One by one he will toss a balloon to each team. The team then attempts to catch the balloon. If the catch it, they get a point and are then allowed to ‘get’ anyone on their team (or a designated target such as the camp speaker). If the team doesn’t make the catch, they get no points, and are likely quite wet. 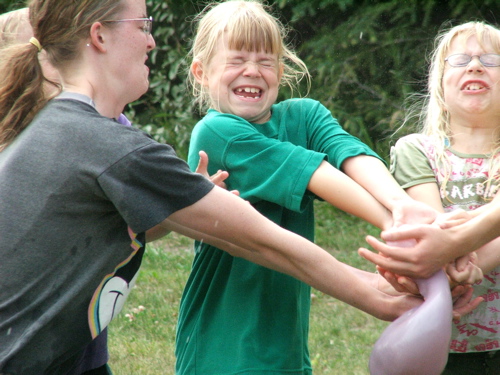 Typically, you start with the normal water balloon sized balloons, and after throwing about a dozen or so balloons to each team, move onto some bigger balloons (worth more points of course.)

Save the biggest balloons to the end to use for “penalties”. Kids love these. Pick the “Driest Guy” or “Most Vicious Girl” or “The kid that looked at me funny” and sit them in the center of everyone and burst the most giant balloons on them. Of course, be sure to pick people who will take it with a good attitude.

Then, wrap up the game by awarding bonus points to the team that collects the most balloon pieces.

If you’re still not quite sure how this all works, check out the pictures below to see the water balloon game in action.

Trying to catch a balloon

Not catching the balloon

Yours Truly Getting a Penalty

Moments before the penalty…

The Penalty in Action